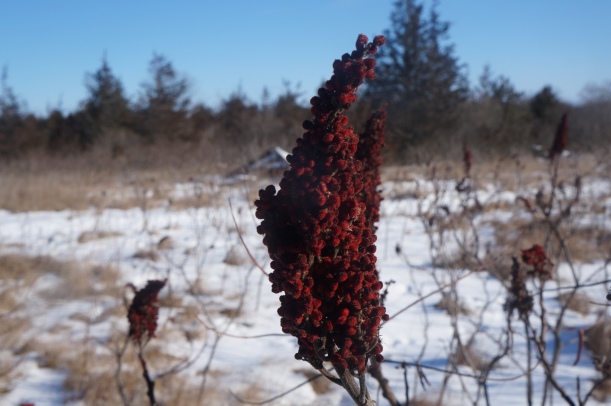 I have written several posts on staghorn sumac, by far the most common of the red-berried shrubs in this area but by no means the only edible variety. When I accidentally stumbled upon another variety, rhus glabra or smooth sumac, I was interested in finding out just what the differences between the two types is.

First I discovered that this smooth variety is actually more common throughout North America than the staghorn. It is also reputed to be more tart. Both varieties ripen in the late summer, but can be picked well into the winter and are perfect for foraging at this time of year.

The bushes are bare of leaves, so you have to rely on the berries to identify them. The smooth variety looks very much like the staghorn, but without the fuzz on either the berries or the stems. Here are pictures of both for comparison.

Just as I was contemplating writing this post, I came across an article extolling the medicinal properties of the rhus glabra. While my purpose in foraging is purely culinary, it is still of considerable interest to learn about the health benefits of any of the ingredients I use from the wild and this article helped me understand just what a remarkable plant I was dealing with. It is a wonder that with so much of it around it still remains unharvested.

I treated it the same as I did with the staghorn sumac. I placed the entire drupes in the oven in a single layer at a low temperature (170 degrees F) for a couple of hours until thoroughly dried. Then I remove as many berries as can be easily scraped off with a knife. These berries get finely ground in a spice or coffee mill, then passed through a sieve leaving a citrusy powder which can be used in everything from soup to nuts! 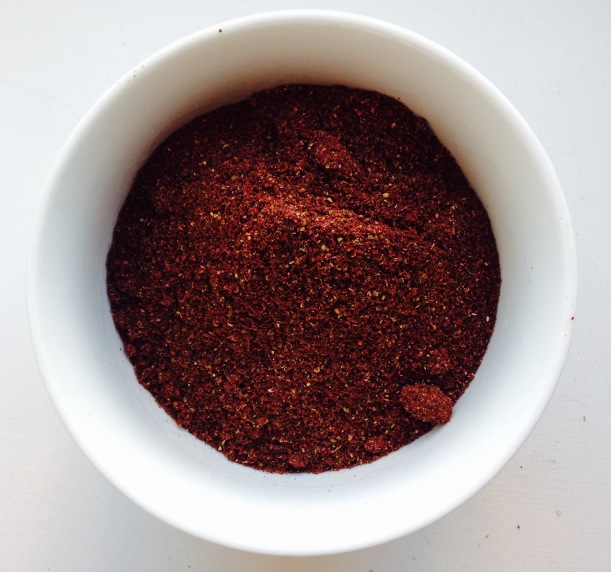 The remaining berries still attached to the drupes are placed in a large saucepan and covered with warm water and left to soak for about half an hour and then strained. In order to extract as much of the flavour and volume as possible, I give them a second soak in boiling water. This liquid can be used to make tea or sumac ‘lemonade’ which is the way it was most often used in these parts in the past.

Perhaps my favourite way of using the liquid is by making sumac mead, although I will be publishing another drink recipe within a couple of days which gives a whole new purpose to collecting this prolific plant.

If you happen to have any Jerusalem artichokes in your garden and you know where they are, now when the top layers of soil have finally thawed is the best time to harvest them. If you don’t have any of your own, you might find some at your local farmers’ market. This is a picture of my patch just before the snow melted – just a few dried up stems from last year.

And here is what I dug up last week.

Once I scrubbed them, sliced and dried them in a dehydrator at 135 degrees F for about 4 1/2 hours until they were crispy dry, I ground them, first in a food processor and then for a finer grind in my coffee grinder. This is what the resulting flour looks like. It would be lighter in colour if I had peeled them, but since they were freshly dug and the peels still very thin and light coloured I just prepared them skin on.

This is an excellent way to store and use Jerusalem artichokes (or sunchokes). It keeps well and can be used in all sorts of savoury recipes and as a flavourful thickener for sauces and stews. In this form, they are less likely to cause any of the awkward digestion problems that cause some people to avoid them all together. I decided to make a gluten-free pizza crust with this batch combined with dehydrated cauliflower. By drying the cauliflower too, you get a stronger flavour from the vegetable and no juices to extract. Just rice the cauliflower and set your oven or dehydrator to a low temperature to dry it gently as with the Jerusalem artichokes. Once dried, grind it into a flour. For the pizza dough I used: 1/3 cup sunchoke flour 1/2 dried cauliflower 3 Tbsp coconut flour 2 Tbsp ground flaxseed 1 cup water Simply mix it in a food processor and form into a bowl. Roll out into the size and shape you want. Add whatever toppings you want and bake it in the oven as you would for any pizza until the edges start to turn a golden brown.

I used pesto, grated cheese and some dandelion capers, but then I still had my cast on my arm and wasn’t going to make it complicated. I could not fool anyone into thinking this was a bread crust, but then why would I want to? The taste of artichoke and cauliflower combine to make a very light and easy to eat crust, and when you want to take a break from the wheat for a bit, this is a wonderful solution. I am sharing this novel pizza with all the party-goers at Fiesta Friday, graciously hosted by Angie from The Novice Gardener, co-hosted by Ginger at Ginger&Bread and Loretta at Safari of the Mind.

All my recipes have been tested and tried by me. However, it is each person's responsibility to ensure proper identification before consuming any wild edible. It is also advisable to try any ingredient in small amounts in case of adverse reactions. Always forage responsibly and only in areas safe to do so and without trespassing.