I made this steamed pudding for Christmas dinner. We always follow the English tradition of ending the meal with the drama of a flaming dish soaked in rum or brandy. There seems to be no question of abandoning this tradition, but truth be told, no one really likes it that much.

So I decided that by making my own version I could not only satisfy the vegetarian without having to make another dish, I could also make something that was lighter and even tastier. And while I was at it, I thought I could improve on the original just by adding some fruit from my garden.

This turned out to be pretty easy, and I have no idea why I didn’t think of this years ago. In fact, it is such a good dessert that there is no need to have it only at Christmas, although I would save the flambeing part and addition of alcohol for that occasion – otherwise it wouldn’t be so special.

Instead of using any sort of candied fruit, I dried the peel of one organic orange and chopped it along with some fresh ginger, thus giving the mass of mixed fruit a distinctively orange and ginger flavour – hence the name.

500 g of mixed dried fruit including dates, figs and apricots

Chop the fruit and pour the juice or alcohol over it and let it sit for about an hour. Mix the softened butter with the sugar, and when thoroughly combined beat the eggs into the mixtures. Add the breadcrumbs, ginger and fruit. Measure the flour and add the baking powder, then gradually stir all the dry ingredients into the fruit mixture.

Pack it into a mould or a pudding dish. Cover it with parchment paper, making a fold in the paper to allow for expansion. Steam it for 2 1/2 hours. It will be easy to invert onto a plate just by running a knife around the edge of the bowl to loosen it.

This recipe makes approximately 1 litre of pudding, so you will likely need two pudding bowls. 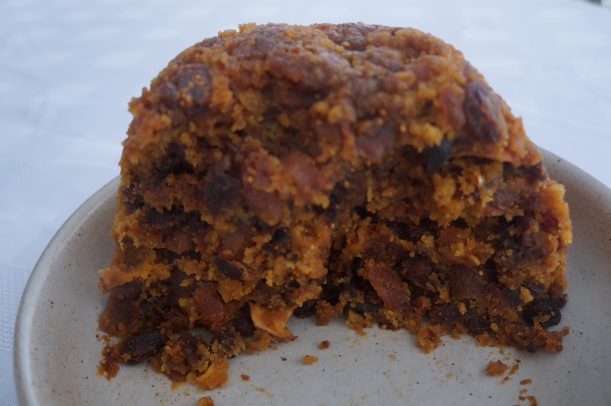 Serve with custard or cream. For Christmas I made a simple sauce of butter, maple syrup, rum and cream.