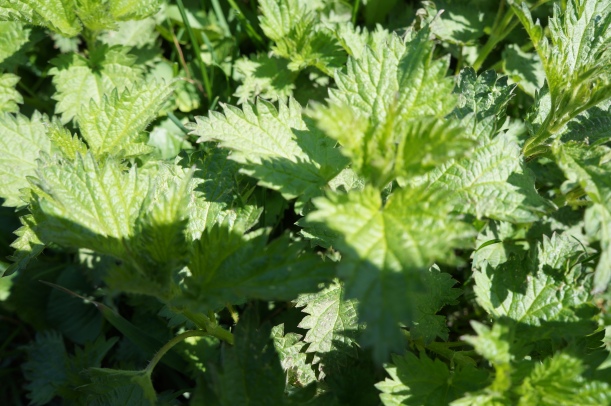 A great substitute for spinach, stinging nettles, or urtica dioica, are an easily identifiable wild plant thanks to their particular ability to sting. The stems and leaves are covered in fine needle-like hairs containing three different toxins. As long as you wear protective clothing and especially sturdy gloves, they are easy to pick, and once steamed or dried, all the sting is lost. The plant appears in early spring and grows to about 1 meter in height. It has heart-shaped leaves with jagged edges.

They are commonly found in woodlands, in fields with rich, moist soil, and often near where there has been human habitation. It is invasive, and most people who find it on their properties use it for compost where its nutrients can be put to use. However, before it is fully mature and flowers, the leaves and stems are not only edible, but one of the most nutritious greens available to us. Because of its medicinal qualities, it has been most often dried and used primarily as a tea. More recently its nutritional value has been recognized and people are rediscovering many ways it can be used – in soups, as pesto, steamed or pureed.

To pick them, I remove the top leaves with my gloved fingers and drop them immediately into a bag or colander. Once picked, I rinse them in the colander and put them in a pot with little or no water, except what adheres to the leaves – and in seconds flat they are cooked. At that point I can remove my gloves.

Once steamed, they can be frozen, or chopped or pureed for immediate use. Mix them with a little minced garlic, seasoning and lemon and they make a perfect green accompaniment for most meals.

With my last batch I prepared a squash roulade which I filled with nettles and cheese. I sometimes mix the nettles with other greens and herbs from the garden. The flavour, like spinach, is quite mild, so mixing it with other flavours is easily done.

1/4 lb cheese, such as goat or mozarella

1/2 cup dandelion or other pesto

Steam the nettles and chop or puree. Set aside.

Melt the butter in a sauce pan over low heat. Stir in the flour. Gradually add the milk, continuing to stir. Add the squash and salt. Allow the mixture to cool.

Beat in the egg yolks. In a separate bowl, beat the egg whites until stiff. Fold them into the sauce.

Prepare a shallow cooking tray by lining it with parchment paper and lightly greasing it. Pour the batter into it and spread it around evenly. Bake for 15 minutes at 350 degrees F for 15 minutes.

Remove from the oven. Immediately, spread the top with pesto, then the chopped or pureed greens, and finally the chopped or grated cheese. Starting with one of the long sides of the rectangle, roll it using the parchment paper. Then remove the paper.

If you are not able to fill it immediately, roll the ‘cake’ as above with no filling and when you are ready to fill it, unfold it, fill it and roll it again. If you try and roll a cooled cake, it will break. The method for rolling is in third picture below, without filling.