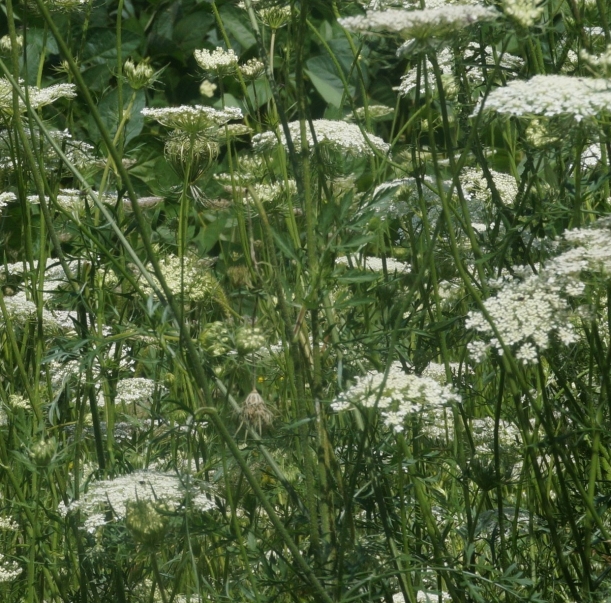 Last year I experimented with Queen Anne’s lace (daucus carota) for the first time and posted a recipe for a flower cordial, which I now usually make without adding any other flowers. The rosy pink colour never fails, and the flavour is exquisite on its own. I use it mixed with sodas, in cocktails, sometimes just with water, and occasionally in tea.

I have altered the recipe slightly. I measure by volume, covering the blossoms with equal parts of boiling water. In fact, I use a little less water sometimes, barely covering the flowers with water and then press them down with a plate. Then I mix the strained liquid with half as much organic sugar, heat and stir just to dissolve. That’s all there is to it.

Since then, I have been determined to find other ways to use this beautiful flower, and especially this year when they are in such profusion, I want to share as many ideas as possible.

I did make a very nice jelly with it last summer but failed to post my recipe.  However, I recently came across another blogger’s recipe which is much the same, so I will take the lazy way out and direct you to it here at Forged Mettle Farm.

Apart from the jelly and the syrup, I have had difficulty coming up with recipes. I used it to flavour rice pudding, but found that the flavour and colour were both overwhelmed with so much cooking and the other ingredients. I remedied that to some extent by making a thick pudding without sugar, once with coconut milk and once with milk and cream, then thinning and sweetening it with the syrup as it was cooling, thus avoiding long exposure to heat. The colour was not there, but there was enough flavour to make a delicious dessert, although not as strongly flavoured as I would have liked.  Experiment will continue. 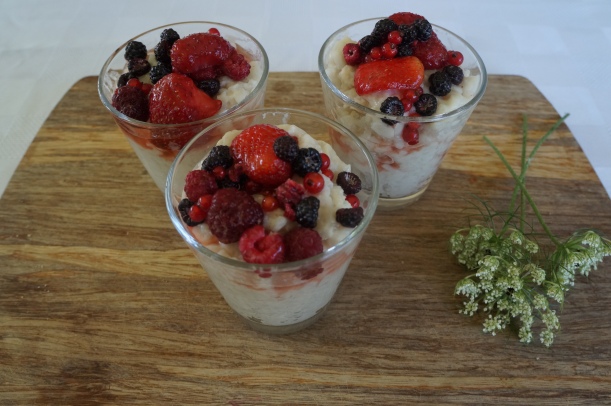 Having recently acquired some scoby (symbiotic colony of bacteria and yeast) I have been experimenting with making kombucha. If you are not familiar with this super healthful drink, you might be interested to read this article I found which will give you the necessary info, and then some. It is so easy to make, and can be mixed with just about anything – fruits, berries, herbs, and even vegetables, in short, all the wild things I write about. And so I have Queen Anne’s Lace kombucha, made by mixing the syrup with prepared kombucha in equal parts, and then allowing it to ferment a couple of days or so. If left longer than a couple of days, remember to open the bottle to let any built up gas escape. You may want to add or subtract the amount of syrup, augment, reduce or even eliminate the final fermentation to get the flavour and sweetness you like best.

If you are frustrated by not having access to a scoby, and you live in this area, I would be happy to provide you with one plus the necessary amount of ready made kombucha to get you started.

And this is what I bring to this week’s Fiesta Friday which I will be co-hosting with Mara from Put on Your Cake Pants.  Do drop by and see what our guests have for you. If you would like to contribute a recipe of yours, you are most welcome. Just check out the guidelines and join the party. 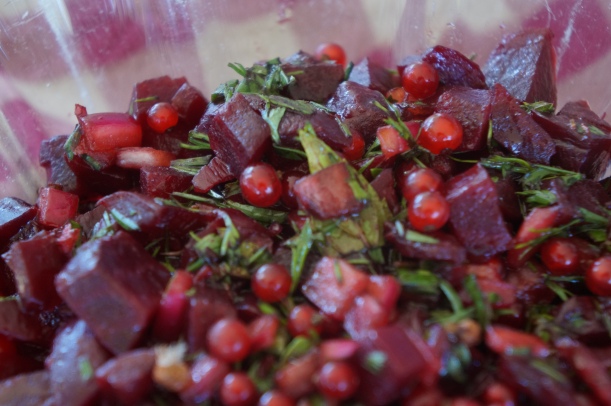 When I read today’s Fiesta Friday post, one recipe featured from last week particularly caught my eye and I decided to make it right away. Unwilling to go shopping I had to make do with either what I had in my own kitchen or garden, and by the time I finished I had used in my version, still recognizable as Monika’s,  a few ‘new’ ingredients I thought worth sharing.

The recipe I refer to is one for Pomegranate Beet Salsa by Monika at Everyday Healthy Recipes.  It is the perfect dish for these hot dry days- simple to prepare, keeps well, and as good on its own as it is a side dish. Thank you Monika!

The so-called new ingredients in my recipe are red currants (ribes rubrum) and Queen Anne’s lace (daucus carota) leaves. The currants I have used before to make salad dressing and mayonnaise, but I had never thought of putting them whole into a salad. They are found in much of North Eastern US and Eastern Canada. Once established they thrive in sunny spots, and apparently are drought resistant given that they are still thriving in our back yard desert. One source I read describes them as a brilliant red skin encasing a pulpy flesh that contains 3-12 tiny edible seeds with flavours of raspberry, cranberry, gooseberry, rhubarb and a hint of rose. That sounds about right to me. Many sources say they are delicious as long as you add lots of sugar, which explains why they are most often used to make jelly. However, used sparingly in a savoury dish such as this one, no sugar is needed. 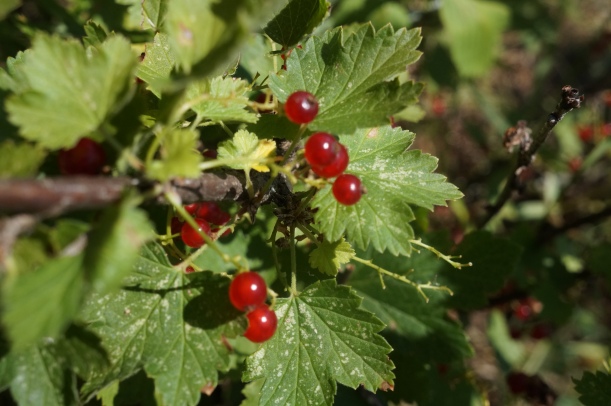 As for the Queen Anne’s lace, there is so much of it blooming right now, but I had not given any thought to anything other than the flowers. I know that all parts of the plant are edible and often see reference to the leaves as being good in salads, but have never seen a salad recipe that calls for them. For identification and further information on this plant, please check here.

Again, the herbs I used are all from my garden, but this salad is versatile, and you can make your own mix of greens to add. As for the oil, I used my black walnut infused oil, and I think any nut oil would be good, or just a good quality oil as Monika suggests, such as grape seed oil.

3 Tbsp finely chopped red onion
3 Tbsp balsamic vinegar
2 cups chopped beets, previously boiled, cooled and peeled
2 Tbsp chopped Queen Anne’s lace leaves
1 heaping Tbsp each of fresh mint and dill
2 Tbsp oil
salt and pepper to taste
3/4 cup red currants
Put the onion and vinegar in a bowl and allow to sit while preparing the other ingredients. Add everything except the currants and mix well. Gently fold in the currants. Refrigerate for at least an hour before serving for best flavour. 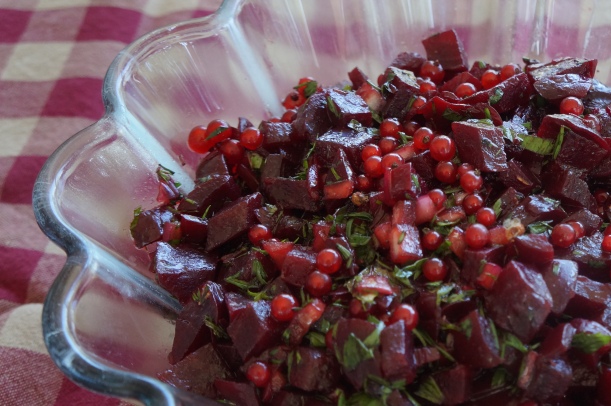 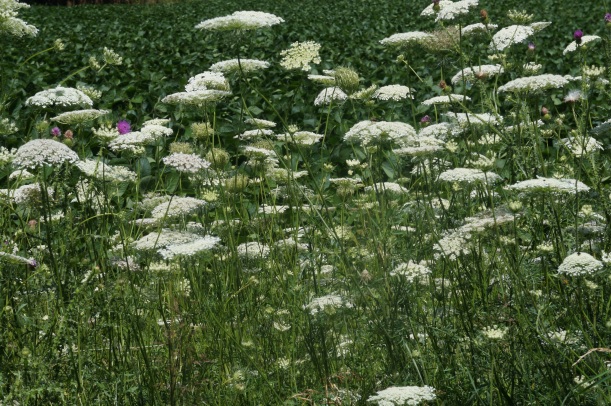 Queen Anne’s Lace (daucus carota), also known as wild carrot, bird’s nest and bishop’s lace is a white flowering plant in the familily Apiaceae. Its feathery leaves are similar to those of hemlock, fool’s parsley and water hemlock, all poisonous cousins, so it is important to identify this plant correctly. At this time of year when they are in full bloom it is easy to spot with its flat-topped white umbel, sometimes with a solitary purple flower in the centre.

Leaves, roots and flowers have all been used in cooking, sometimes as a sweetener as the plant is high in sugar. As this is my first time with this plant, I decided to use just the flowers, and to make something simple and versatile, so a floral cordial it was.

Somehow I got sidetracked by the pink milkweed blossoms from which for the first time I noticed a strong fragrant scent. And while I was at it, I added lavender to my collection. This recipe could be made solely with the Queen Anne’s Lace, but by using a mixture of flowers, I hope to convey the message that any edible, seasonal flower can be used the same way, either alone or mixed with others. 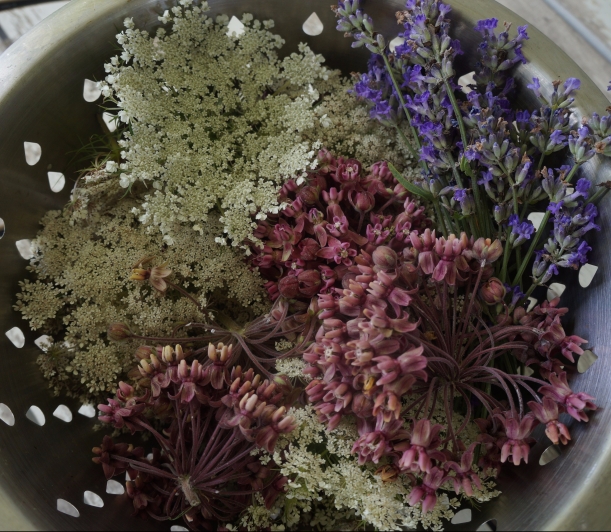 I counted out 3 dozen flower heads including only 1 sprig of lavender. I heated 4 cups of water, turned off the heat and set the flowers in the water until the water cooled. I then strained the liquid and added to that 1 1/2 cups organic white sugar and the juice of one lemon. I brought it back to a full boil and simmered for a couple of minutes.

The milkweed gave it a rich pink colour. I presume that all the blossoms contributed to its delicious flavour. 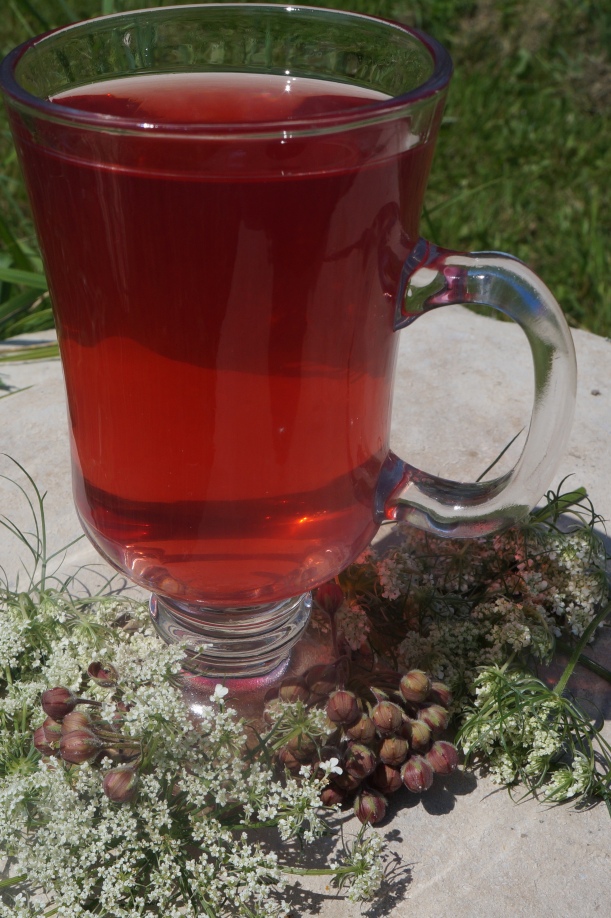 The photo above shows its colour in full strength, but I recommend diluting it with 2 – 3 parts water or soda water with one part cordial. Or if you are wanting something a little fancier,  dilute it 1:1 with vodka for a pretty summery cocktail. 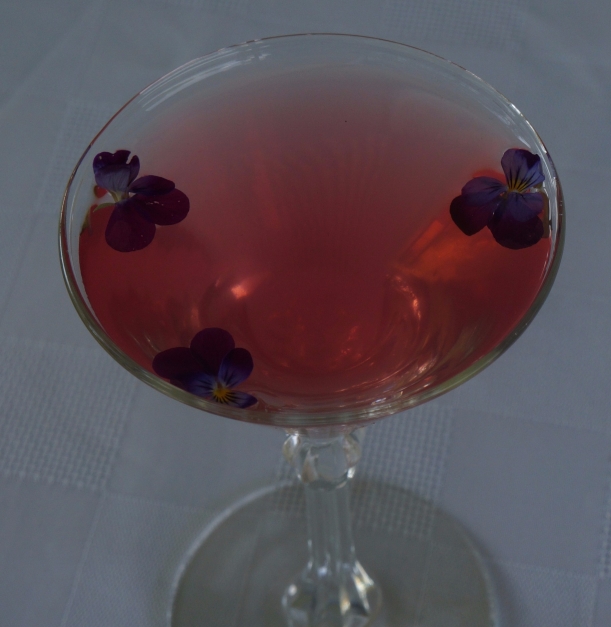