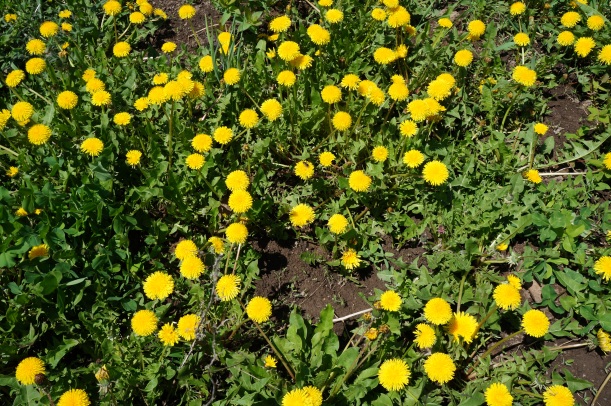 There is little time left to collect dandelion flowers this year. My spectacular crop is quickly going to seed, especially those plants which have been left unmowed, and which now exceed the typical maximum height of 45 cm. I was however able to collect a bucket full today from the mowed areas to make the season’s last batch of my new favourite summer drink – dandelion gin fizz.

There is no need to give descriptions of this plant for purposes of identification – if you have them anywhere in your area, you already know them. As for foraging, just make sure that they are picked only in clean areas, free of pesticides and other chemicals, or contaminated run-off. Around parking lots, train tracks, heavily travelled roads and polluted waters are to be avoided.

Roots, leaves and flowers are all edible. In fact, it is a common culinary and medicinal plant in many parts of the world. For more on the benefits and contraindications, check this post. Unfortunately, its uses and benefits are still relatively unrecognized in this part of the world, which makes it a great source of experiment for curious cooks.

Which brings me back to my bucket full of flowers. Last year, at about this time, I wrote my first post on dandelions, including recipes using flowers for dandelion pakoras and syrup. Since then, I have come across a few recipes for lacto-fermented soda, such as this one and of course I had to try it. It is easy, economical, and full of all those wonderful pro-biotics found in fermented foods and drinks. I was also intrigued to think that this could be a home-made soft drink. I am not a fan of the overly sweet commercial fizzy drinks, with the exception of tonic water for my G&Ts, which despite its grown-up bitter flavour, has as much sugar as the worst of them. So I was thinking along the lines of a good gin and tonic type drink as a post-gardening/weeding refreshment.

I made this one with whey as a fermenting agent. For the whey, you can strain some natural, plain yogurt through a sieve lined with cheesecloth. You don’t need much, and it keeps in the fridge for at least a week, and can be frozen. My next batch I will make with a dandelion bug, that is, a fermenting agent made with edible root, water and sugar. Most ‘bugs’ are made from ginger, but in fact any edible root works – so why not a dandelion root? To get a clearer idea of what I am referring to, check out this post for a ginger bug where the process is clearly explained.

Fill a clean mason jar about 3/4 full with dandelion petals – only the yellow part.

Cover with boiling, filtered water and let stand for about 24 hours.

Strain the mixture, and squeeze out all the liquid you can from the petals.

For every cup of juice, ad 1/4 cup whey and 1/4 cup sugar syrup (made from heating until sugar is dissolved 2 parts sugar to 1 part water).

Cover the jar with a clean cloth and allow to stand for about five days at room temperature stirring once a day.

Small white bubbles will form on the top. If it goes mouldy, then throw it out. When you stir it, check the taste. It will have a dandelion flavour, but should be palatable.

Mix the first 4 ingredients and pour into glasses over ice cubes.

Not as bitter as a commercial tonic, this drink has a mild fruit taste, something like a pear nectar. The fizziness is lighter than a traditional G&T, but it is every bit as refreshing and satisfying.

For this week’s Fiesta Friday, I had planned to bring a beautiful purple drink made of dog violets which are growing everywhere around me today. They are so beautiful, and I wanted to preserve them in a festive way. I spent much time picking them, then I candied some which are still drying and that was a job and half in itself. I then made syrup which is something less than the remarkable blue I was aiming for. Here are some pictures of how I spent my morning. It was entertaining, but for nought.

In the meantime, I was ready to try my latest experiment – lacto-fermented ramps, which I hadn’t even intended to write about but they proved to be so good I wanted to share it with Angie’s guests, especially those who like me have never preserved anything this way before.

Lacto-fermentation is an age-old method of preserving which actually makes good food even better and more nutritious. The sugars in the food feed on bacteria that grow in the fermentation process, which converts the sugar to lactic acid and gives you all those great probiotics we hear much about.

There are so many recipes out there for fermenting just about anything you can think of, and such a variety of methods, I wasn’t quite sure I would be up for the task. Luckily for me, one article said all you needed besides the food you were fermenting was water, salt and clean jars. So that is all I used for this first foraged foray. 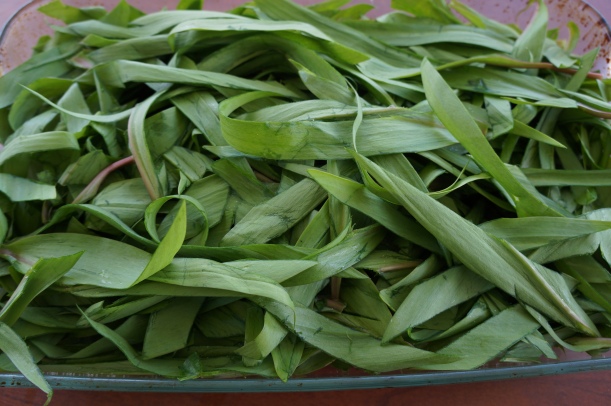 I sliced all my ramp leaves into strips, lay them on a large casserole dish and sprinkled salt on each layer. For about 4 cups of ramps, I used 2 tsp of fine sea salt. I let them sit for about 4 hours, hoping that the salt would draw out water. I even pressed them a little with a wooden spoon, but they remained pretty dry. 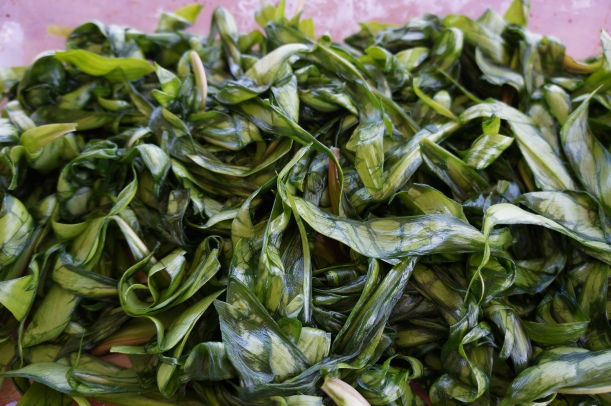 Leaves after a couple of hours mixed with salt

I then stuffed them in a sterilized jar, pressing them down as I did so as not to leave any air pockets. Then I covered them with non-chlorinated water, put a weight (a small glass jar) on top and covered them loosely with a lid. Every day, I checked that none of the green was surfacing and pressed the weight down a little if they were. After about three days I noticed a few white bubbles on the top which indicates that fermentation is happening. Finally today, the ninth day, I decided to give them a try. This jar below is not the one they were fermented in, which is why you can see air bubbles.

I knew I was onto something because they were delicious. The flavour of the ramps was intensified by this process, and they were a little more tangy than the steamed or fried ones I had tried just a week before. I could have added interesting spices and other flavours, but for my first attempt, wanted to make sure I understood the process. I served them just as they were, although I had several thoughts on how they could be used in other recipes – quiche, pizza, spreads and soups to name a few.

Maybe it was beginner’s luck, but I am so excited about all the possibilities this has opened up to me and look forward to continuing to experiment with this super economical and healthful method of preservation. Sadly, no more ramps this season, but as other plants mature in my garden, there should be plenty of new ingredients to keep me busy.