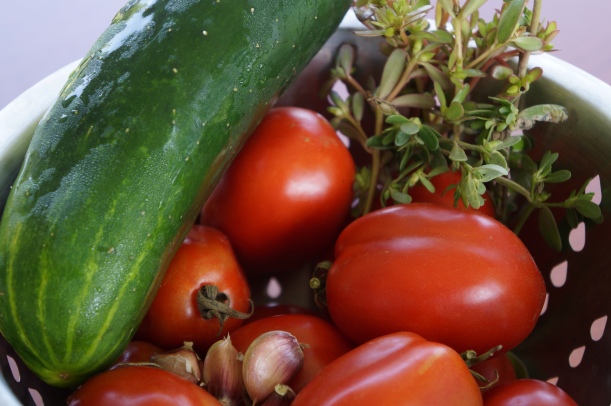 If you are looking for a gazpacho recipe which is smooth and creamy, spicy, and can be whipped up in a food processor in a few seconds, you’d better keep looking. There are plenty of those recipes out there, but when I make this traditional Andalusian soup, I make it as my Spanish professor’s wife taught me several decades ago, and as I saw it made when I lived in Spain shortly after that.

Since that time, gazpacho has become a popular ‘ethnic’ dish, with so many variations it seldom resembles the simple, cold vegetable soup I came to know and love in Spain. Its predecessor was a soup made of bread, olive oil and garlic, and only after the ‘conquista’ did tomatoes enter into the picture, and with them a few other local, seasonal ingredients like onion, cucumber and sweet pepper.

So for this week’s Fiesta Friday, I would like to share this recipe I have made over the years, a recipe which has a distinctively Spanish flavour but which I am able to replicate with ingredients from my own garden – the best of both worlds.

I was instructed that a good gazpacho starts with dried, crumbled bread. Into that, crushed garlic, salt and vinegar are rubbed together, and then a generous amount of olive oil added gradually, forming a creamy base which blends easily with the fresh chopped vegetables. This is not to say that you can’t ad-lib a bit, with sweet herbs or other seasonal vegetables. I made a couple of minor changes. I used homemade whole wheat bread because that’s what I had, and I substituted purslane for the green pepper.

I have written about purslane before. To learn how to identify it and about its nutritional properties, please visit this post. You will see that by adding purslane, I actually upped the omega-3 content, among other things. I gather purslane does grow in Spain, because in researching it, I found it grows pretty much everywhere. I have small patches of it throughout my garden, and one pot where it volunteered and smothered the pepper plants I was starting. 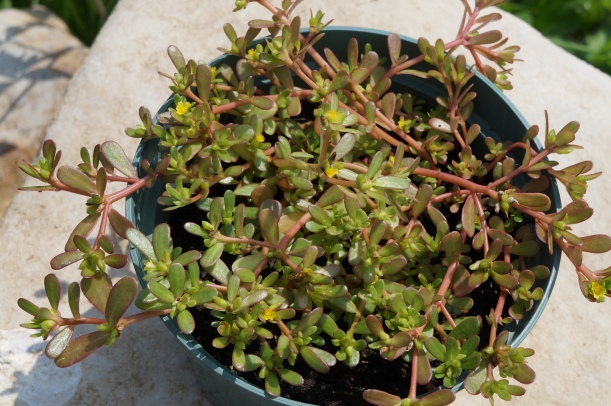 So it is appropriate I chose to replace peppers with it.

a handful of purslane, chopped

Grate the bread to make a fine crumb and rub in the crushed garlic, salt and vinegar. Gradually add the oil and mix it vigorously.

Chop the tomato and purslane very fine. In order not to waste any of the juice, I put the seeds in a colander and strained as much juice as I could to add to the tomatoes. Grate the onion and cucumber. Add all the vegetables and combine. Chill for a couple of hours, and garnish it with an ice cube if you want it really cold. 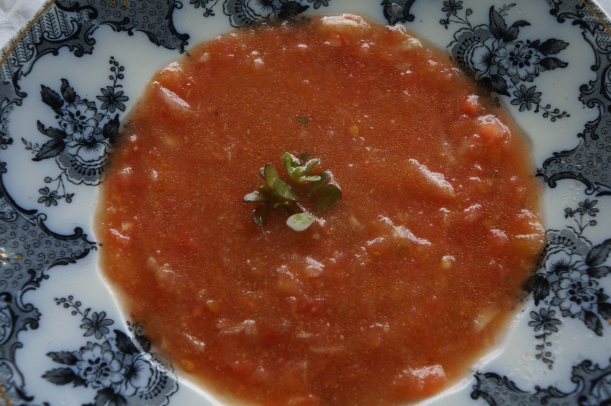 All my recipes have been tested and tried by me. However, it is each person's responsibility to ensure proper identification before consuming any wild edible. It is also advisable to try any ingredient in small amounts in case of adverse reactions. Always forage responsibly and only in areas safe to do so and without trespassing.
Loading Comments...
Comment
×