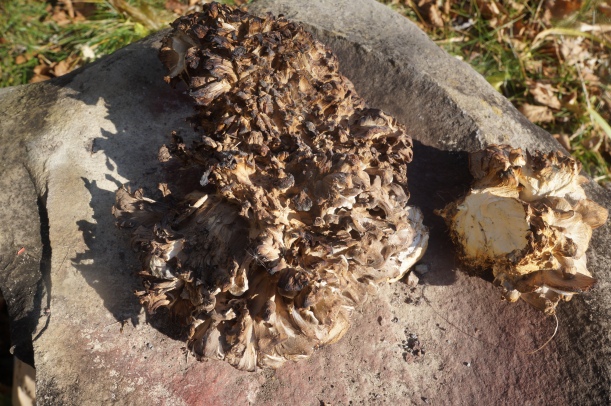 A local forager had collected an impressive amount of maitake mushrooms (grifola frondosa), and I jumped at the chance to take some off her hands. In this part of the world, apart from in Asian supermarkets, they are more commonly known as hen-of-the-woods, probably because of their clusters of spoon shaped caps resembling fluffed-up chicken feathers.

Native to Japan and North America they are found in wooded areas growing at the base of trees, oaks, elms and sometimes maples. They feed off the rotting roots of the trees, and when found are often abundant. They have long been recognized in Asia for their medicinal properties, and here they are increasingly popular as a rich source of minerals, vitamins, fibres and amino acid. I had never cooked with them before, but the wonderful woodsy aroma that filled my car on the way home indicated I was in for a treat.

I cooked a few immediately in a pasta dish just to try them out. Robust in flavour and firm in texture, they were unlike any other mushrooms I knew of.

I decided to dehydrate the bulk of them, as mushrooms always seem to benefit from the drying process in concentrating their flavour. These required about 8 hours, depending on how thick you cut them, at 135 F or until they are brittle.

I set aside a few to make a recipe I have been wanting to make for a long time – a dish I used to have in Russia called julienne. I know that usually refers to a method of cutting vegetables, but the Russians adopted many French terms in the old days, making their own original dishes, and this is one of them. It consists of mushrooms cooked in a rich creamy sauce, and served piping hot in little clay pots or sometimes in a pastry shell.

I have no recipe for this, but worked with my memory of how it tasted. I made it a little less rich by using yogurt instead of sour cream, and to prevent it from being too runny, I first strained the yogurt through a couple of layers of cheesecloth for a couple of hours to remove the excess whey. The result was a little more tart than the julienne I remember in Moscow, and not quite as smooth and creamy, but I actually liked it just as well, especially considering I made more than just a little ‘pot’ of it and didn’t want to over-indulge. The cheddar cheese is also a Canadian touch which, in my opinion, works brilliantly.

Fry the onion and mushrooms until the onions are soft and transluscent. Add the seasonings and white wine and heat through to let the alcohol evaporate. Stir in the cornstarch, then the cream and the strained yogurt. Place in oven proof ramekins or a single dish, sprinkle with the grated cheese, and broil until lightly browned and bubbly.

It is delicious served hot as an appetizer or a side dish. I also tried it cold as a spread with cucumbers.

You can use any kind of good quality, fresh mushroom for this dish, but if you come across these meaty maitakes, I hope you’ll give them a try.

All my recipes have been tested and tried by me. However, it is each person's responsibility to ensure proper identification before consuming any wild edible. It is also advisable to try any ingredient in small amounts in case of adverse reactions. Always forage responsibly and only in areas safe to do so and without trespassing.
Loading Comments...
Comment
×