We are just now getting our first real blizzard of the season. It has been snowing all day, and tomorrow we may just be snowed in. This is what it looked like yesterday when we went for a walk on the lake.

And this is what it looked like today in the early hours of the blizzard.

So what do we do when we are getting snowed in? We make snow kachangs.

Actually, I’ve never made one before, but decided to give it a try for the second part of Angie’s Fiesta Friday first anniversary celebration where we have been invited to bring a main course or dessert.

This recipe is based on a favourite sweet dish of mine that I used to enjoy in Singapore called Ice Kachang, usually spelt kacang. It was a while before I had built up enough curiosity to try it, but once I did I thought it the best way to cool down when on the town, and something that I would have to recreate when back home in Canada. It has taken me a long time.

When I first saw it, I was not impressed. All I could see was a tall pyramid of shaved ice, with 3 or 4 garish coloured syrups poured over it. I’m pretty sure the green colour was made from pandan, but have no idea what the others were. When I finally ordered one, I found that this pyramid covered a delicious mixture of adzuki beans, sweet corn, little cubes of agar agar or jelly and a very sweet brown sugar syrup. Sometimes other things like tapioca or coconut milk were added making a kind of sweet pudding salad. Of all the pictures I have found on line, none resembles what I had in Singapore. The original recipe is Malaysian, and seems to have a lot of the pudding on top of the ice shavings. Other pictures show all the ingredients including the ice mixed together. I am sticking with the pyramid shape and only syrup on top. 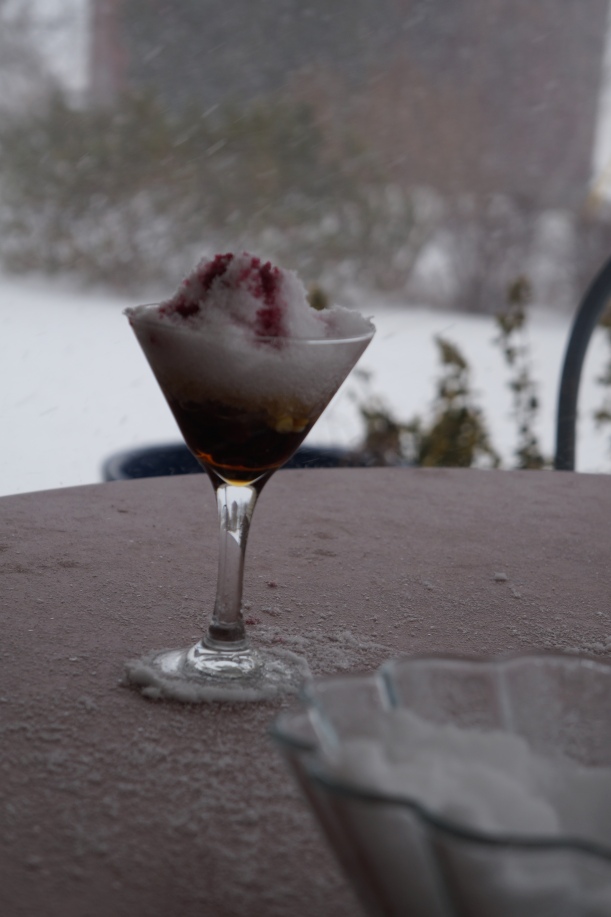 For my recipe I used snow, of course. It takes quite a bit of the white stuff, and I failed to make a really tall pyramid. But as I assembled it outside to give me time to get pictures, my fingers were becoming numb with the cold and harvesting any more snow was out of the question.

I intended to use adzuki beans, but was unable to find any, so settled for small kidney beans. I figured with the syrup everything would be sweet enough anyway, and I was right. Besides beans I used sweet corn, cubes from the pealed leaves of my aloe vera plant, and our own maple syrup.

Once these ingredients are assembled in any proportion you like, just pile on the snow. The syrup I used to drizzle on top was some wild grape syrup I had lingering in my fridge, but any sweet syrup will do, preferably one made of fruit or berries, or pandan if you are lucky enough to have any. 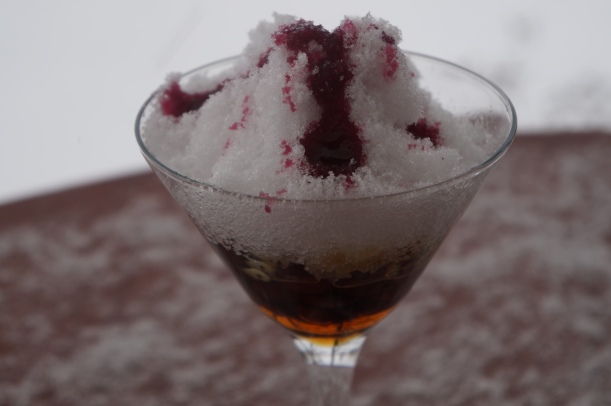 The result, which we did bring indoors to eat, was every bit as good as the Singaporean version but with a distinctive Canadian touch. This is a recipe you can make your own with whatever local ingredients you have, and ice shavings if you don’t have clean snow available.

Thanks to Angie at The Novice Gardener as well as this week’s co-hosts, Nancy at Feasting with Friends and Selma at Selma’s Table for managing this event, and to everyone else, enjoy the party! 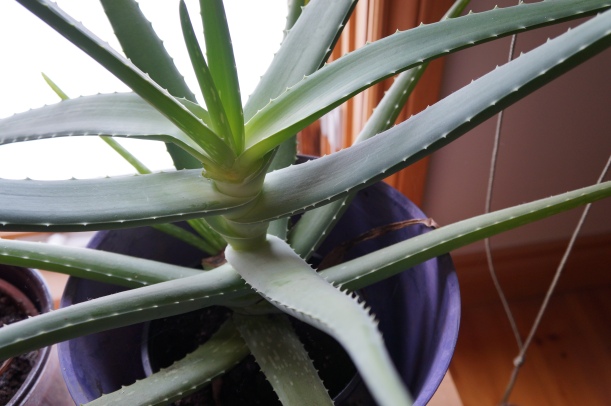 There is no rule that says foraging cannot be done indoors, so now that the ground is covered in snow and ice, I have turned my attention to some of my houseplants. It was a surprise to me that aloe vera is edible, at least the clear, jelly like innards of the thick leaves. I learned this from this site here. The pictures and the description of the plant as edible convinced me to try it.

After all those festive meals, I wanted to make something light and healthful – and you can’t get lighter or more healthful than this superfood. I have listed some sites below which list the myriad benefits of this plant. I found the taste a little bitter, until soaked in some lime juice, which removed any bitterness and left really no flavour at all. So it is used more for its decorative and nutritional value than for taste. It is considered a great detox food and can be mixed into smoothies as a thickening agent. You lose the prettiness of the gel that way, but might be worth a try anyway, especially if you don’t like anything gelatinous.

Cubes of aloe vera on a stick

To prepare it, just cut the leaves off the plant at the base. First,I cut off the spiny edges with a sharp knife, and then ran the knife under the thick exterior and filleted it like a fish. Just be sure to remove all the green parts. The flesh should be completely clear. Cut it in cubes and soak it in the juice of lemon or lime.

My first idea was to add it to a fruit salad – our Boxing Day Brunch. Having soaked the aloe in lime juice, I just threw the whole dish (contents) into some chopped apples, persimmons and pomegranate, but obviously whatever fruits you have work just as well.

Essential in any special brunch is a glass of bubbly, so I mixed some with orange juice, freshly squeezed, for it was Boxing Day after all. Then I used pomegranate seeds, orange slices and cubes of aloe vera for garnish. And a new recipe for a mimosa was invented.

If any readers have any other ideas of what they have done with this plant, I for one would be very grateful if you could share it. I think using aloe vera as an edible plant just might catch on.