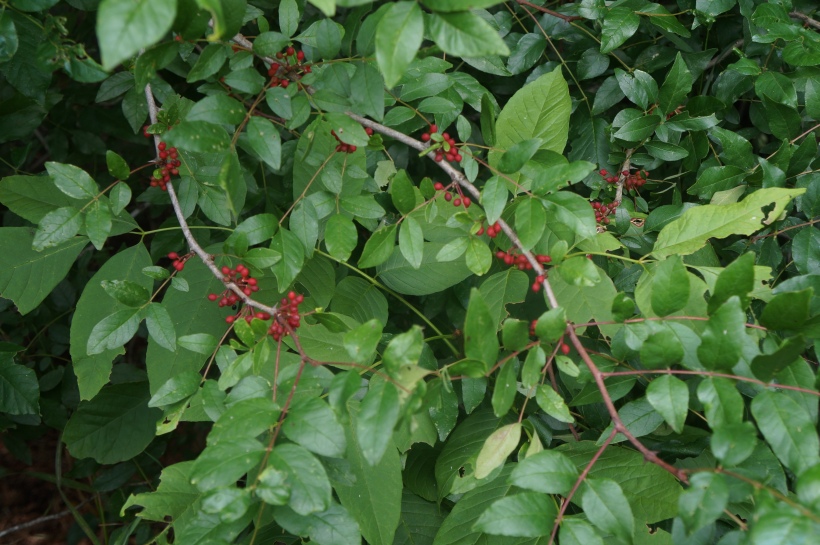 I first wrote about prickly ash (zanthoxylum americanum) aka Szechwan pepper last year in this post and now is a good time to revisit this prolific plant and for me to give an update. As I mentioned in my previous post, the berries can be picked at any time of the year once there are leaves on the plants, while it is still green or even when the berry has fallen and only the brown husk remains. This year I started picking in August when the berries were a bright red and easy to spot. Most are still red now in mid-September, but they are beginning to fade. I found the best way to pick them was just to cut off the branches and remove the berries in the comfort of my kitchen. No worries about over harvesting these berries. They are an invasive weed and we can’t eradicate them from our property no matter what we do.

I dried them on the countertop and within a day or so the husks turned from deep red to brown and the shiny black berries were exposed.

Now they are ready to be stored and used in so many ways. So far I have made spice mixtures, added them to fermented pickles, to sauces, dressings and even to some sweet dishes. They are not hot like black pepper or chilis but have a citrussy smokey tang to them which pairs well with so many flavours.

For today I made a simple spicy cucumber dish, a popular item on Chinese menus, and one in which the flavour of the Szechewan pepper really shines. I made it rather hot and garlicky, but you can tone down those flavours by reducing the amount you use, and by removing the seeds from the pepper. I did not have chili oil on hand but infused one chopped, dried chili pepper in 2 tablespoons of oil.

Roast the Szechwan pepper and the chilis in a skillet until they release their aroma, but being careful not to scorch them. Mix these with the other ingredients for the dressing and pour it over the sliced cucumbers, toss and serve.

Linked to Fiesta Friday #188, Jhuls at The Not so Creative Cook and Nimmi at Adorable Life.