My seabuckthorn plants are flourishing, and the three female plants are producing far more berries than I can pick. They are also reproducing at an almost alarming rate, although the lawn mower has unwittingly taken care of some of the shoots coming from, I believe, the male plant. Their rate of growth is encouraging, and I expect some of the seeds will find their way into neighbouring properties, so foraging sea buckthorn in this area might become a reality before long.

I have written about this remarkable shrub in an earlier post, but since then have learned some practical tips about how to harvest them. They are difficult to pick. They are indeed thorny, and the small berries are soft with a very thin skin, so as soon as you apply a little pressure when picking, they tend to collapse and squirt you with sticky juice. However, if a few branches are snipped off and put in the freezer for a day, they can then be removed from the branches quite easily. As the plants need some good pruning anyway, this is the perfect time to do it.

If you find them in a local market, this is the way they will be displayed – thick clusters still on the branches.

The delicate leaves can also be removed to make a delicious tisane.

As for the berries, I decided to make a jelly which would be an easy way to preserve them, and presumably a useful addition to my pantry. I used only one cup of berries, and did not worry too much if some of the woody bits attached to the base were still attached as it would all be strained after the first cooking.

To make the jelly, I covered the berries with water and cooked them until soft – about ten minutes. I strained them, added a little hot water to the pulp and strained them again.

For two cups of strained juice, I added three cups of organic sugar. This I brought to a boil and then simmered until it reached a temperature of 235 degrees F or 120 C. If you don’t have a candy thermometer, you will know it is ready when it reaches the soft ball stage.

Pour into a jar and let cool. The amount of sugar in this means that it will keep for a few weeks, so I didn’t worry about processing it. I didn’t even remove the foam from the top because it too is just as tasty! 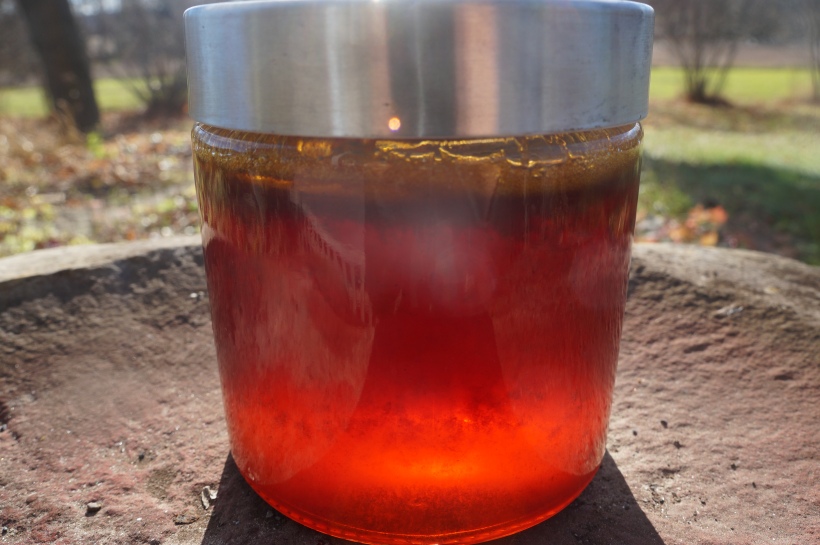 The flavour of the sour raw berries is not appreciated by everyone, perhaps because it is so unfamiliar, but once cooked with sugar it has a fruity caramel taste. It makes a wonderful spread, but can also be used in baking, desserts, as a glaze or a sweetener for drinks. In short, anywhere you might use honey.