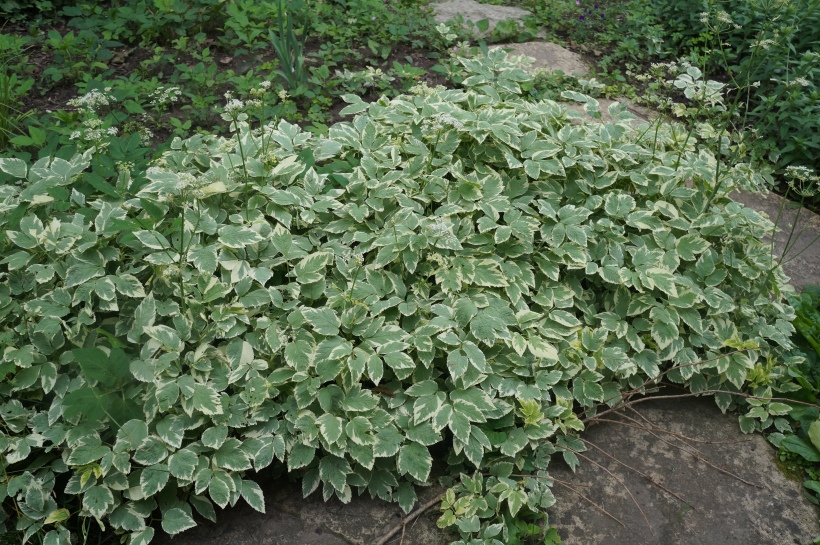 I hesitate to put the word ‘goutweed’ in the title of a recipe, but there’s no way around it. That’s what it’s called, and to give it a more appetizing name might just confuse everyone. So here it is, Goutweed chimichurri.

First, I should explain what goutweed (aegopodium podagraria) is, although most gardeners in this area are very familiar with it – even if not by name. Although for most considered an invasive weed, It is a plant still sold at nurseries for landscaping, especially the variegated ones which really are pretty used as a border or ground cover. But be careful because once planted it can NEVER be eradicated, and just keeps spreading and crowding out anything around it.

I happen to have inherited some in my garden, so I make the most of it, and still pull out as much as I can. At this time of year I am busy digging up bushels of weeds, so I was pleased to find that goutweed leaves and stems are edible, especially when young and tender and always before it flowers. Where it has been cut back, I get a steady supply of new growth which can be picked right into the fall. It has many medicinal uses, including traditionally the treatment of gout and arthritis, but has been used in Europe as a salad ingredient and pot herb. It has become naturalised throughout most of North America as well as Japan and New Zealand.

The variegated leafed plants are easiest to identify with their creamy white and pale green patterns. When allowed to spread uncontrollably, they will revert to a solid, darker green. The leaves grow in groups of three, and have pointed, serrated leaves. The veins on the leaves extend right to the end of the leaf, unlike the poison hemlocks of the same family (apeaceae) whose veins end between the teeth of the plant. The flowers which appear in mid-summer are small five-petalled flowers on tall stems. Another characteristic of this plant is that they grow from rhizomes – not edible.

While the young leaves are good raw, tasting to me something like a cross between parsley and carrot with a hint of celery, the older leaves are good cooked in soups and vegetable mixtures. I decided to use it as a substitute for parsley in a chimichurri which I learned to make years ago when I lived in Argentina. Since that time, this simple condiment has made it around the world and undergone many changes. I wanted to make something as close as possible to what I remember having way back when but without the parsley.

If using a food processor, simply blend all together. Otherwise, chop the greens and the garlic very fine and stir in the vinegar, salt and oil.

Serve as an accompaniment to grilled meat and/or vegetables, or as a spread on crackers or toast.

14 thoughts on “Chimichurri and Goutweed”