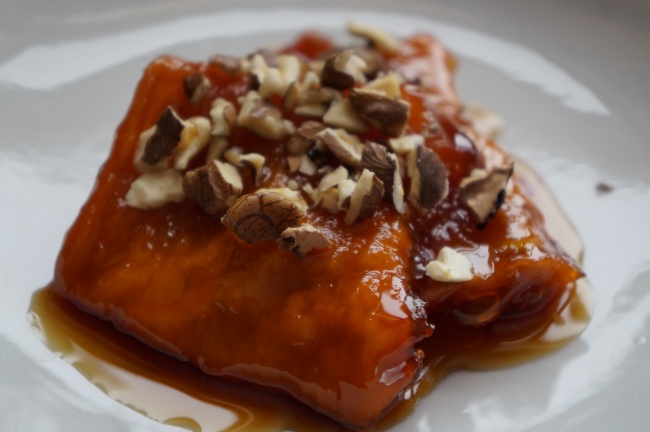 This blog is about wild food, which means I have to use a little imagination to incorporate the wild edibles with recipes I am eager to share. This dessert is a recipe worth sharing, with or without the wild element, but it does highlight the black walnuts in a spectacular way. If that sounds a bit of exaggeration, I can honestly say this is my all time favourite dessert.

I first discovered it in South America where it is called ‘zapillo en almibar’, and consists of cubes of squash in a sweet syrup. The addition of pickling lime, or calcium hydroxide gives it a firm exterior while keeping the interior beautifully soft and smooth.

I later discovered that this sweet originated in Turkey and is called Kabak Tatlisi. I have been making it for years, but just now learned its name. I found many recipes on line for it, a few even in English, but they are a little different from the way my Turkish friends taught me. Most of the recipes I found added some water, and they cooked it in a pot on the stove. I am sticking with my Turkish friends’ recipe, which is simple and fail-proof – no water and poached in the oven. Instead of using cane sugar, I used maple sugar, which should appeal to anyone who likes maple, which is to say Canadians. But any sugar is good. I also used black walnuts, which are a great contrast to the sweet syrup. You can use any walnuts, or other toppings such as sesame seeds, pistachios, filberts. I even saw it with a tahini sauce on top.

This same method is used for figs, green walnuts, eggplant and tomatoes. I have tried the first three but not the tomatoes. Squash is still my favourite. The traditional squash, I have read, is butternut, but any squash which is firm when cooked works well. I used a hubbard squash.

The recipe is simply this:  Chop or slice the squash and cover it in a bowl with sugar. Let it sit until the sugar turns into a syrup, several hours. You can hasten this a bit by stirring it gently, especially if using a coarse grain sugar like maple. Put the whole lot into a baking dish. I baked it for about half an hour at 325 F, until the squash feels soft when poked with a sharp knife. Serve with walnuts sprinkled on top.

Squash after a few hours of soaking in maple sugar

Squash in syrup ready for the oven

My Turkish friends told me equal weight of sugar and squash. So my first recipe, pictured above, I did exactly that. The next time, pictured below, I used only half the sugar and mixed cane and maple. The important thing is to have enough syrup that it doesn’t harden before the squash it cooked. One way to ensure that does not happen is to use a pan which will not spread out the syrup too thinly. I prefer to use more rather than less sugar, since  left over syrup can always be used in baking, on pancakes, ice cream etc.

It occurred to me to serve it with whipped cream, but did not bother. I am now wondering if there might be an ice cream dessert there somewhere.

Note: You can cut it in slices or cubes. Just be sure the pieces are all the same size so that they cook evenly. Also, if in slices, it should not be too thin, no less than half an inch, because the creamy texture of the squash would be partly lost.